Zabul raisins, almonds, and figs are exported every year to some foreign countries, including India and Pakistan.

Karimullah, who wore a gray cloth and brought some raisins to the market in a white bag and did not find a buyer for them, says that this year’s harvest is very less and poor.

He added that he has been circulating his raisins in the market for the past few days but has not found anyone to sell them. 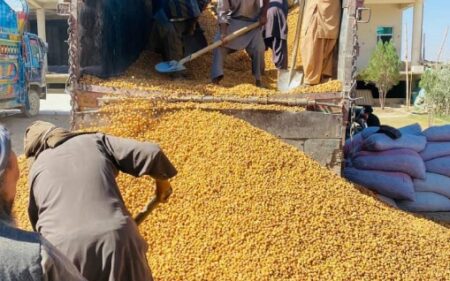 Even though he has a big garden, Vodud now sells children’s winter clothes in front of his shop due to the less harvest. According to him, this year, due to the poor quality of the grapes, these products were sold at a low price.

“This year, with the floods, all of our grape harvests were destroyed. Before with this amount of harvest, we were able to earn profits of around one million Afghanis, but now our profits reach six hundred thousand Afghanis”.

Mohammad Akram, who buys raisins from people at the Raisin Stores in Qalat city, says that during the last year, seven kilos of raisins were sold for 1000 Afghanis, but now the same amount of raisins is not even sold for 500 Afghanis. 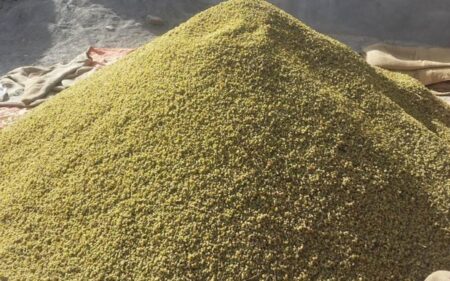 “This year, compared to previous years, the price of raisins is very low, because their quality has been lost due to the rains. It used to be seven kilos in thousand Afghanis but this year it is not even five hundred Afghanis”.

Abdurrahman has a small orchard of almonds and grapes in the Tarnak area of ​​Qalat city. This year, he did not get anything from it. He wants the cooperation of the government with gardeners.

“Almost 50% of our raisin, almond, and fig crops have been lost. The Department of Agriculture should help us by providing medicines and giving us the medicines on time so that our products can be sold at a reasonable price in the open market”.

Although the Zabul Agriculture Department has not specified the exact amount of annual raisin production, they say that the production of raisins has been reduced by half.
Maulavi Attaullah Rashid, head of the agriculture department in Zabul, says that the unseasonal rains and floods had very bad effects on the production and income of raisins, which have decreased both in terms of quality and price.

According to Rashid, they have been helping farmers since last year, and now they have given modified seeds and chemical fertilizers to 14,000 farmers, and this assistance continues.

“Last year’s unseasonal rains had a very bad effect on raisins, their quality is low and it is not sold at a reasonable price in the market. We have helped 14,000 farmers with chemical fertilizers and improved seeds”.

The climate of Zabul is very suitable for planting grapes, almonds, and figs. The grapes are harvested during the summer and then hung on the vine. Then it takes about two months for the grapes to turn into raisins and be ready for market.

The People of Zabul Need Medicine and Health Services

Thomas West, the US Special Envoy for Afghanistan, Visits Pakistan