Rahmati Museum of Zabul in Mirror

A resident of Qalat city has built a museum by collecting hundreds of historical artefacts at his own expense, which is visited by other provinces besides Zabul.

The head of the museum and the general public request the government to enrich this museum and cooperate with it.

We opened the door of the Rahmati Museum in Badamgol Palace, a place in the east of Qalat city where history is preserved. 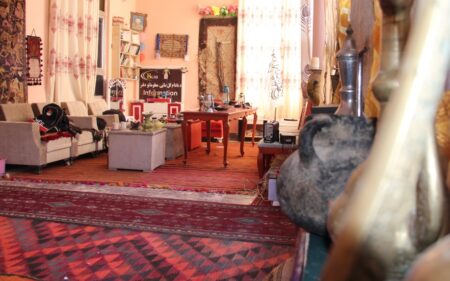 Swords, guns and old historical artefacts from centuries ago are placed on the boards in front of the audience.

It is said that the history of these works reaches eight centuries, and a total of 250 historical monuments are kept in this museum for the past seven years.

Najibullah Rahmati, the head of the museum, is sitting on a velvet chair among the historical monuments.

He said that he collected these monuments at his own expense and no other organization helped him.

But at the same time, he asks for cooperation and help from the Islamic Emirate and says:
(In this museum, we have 250 ancient artefacts whose tradition and age reach more than eight centuries.

Every day dozens of people come here and visit the museum. It was my personal hobby to activate it and preserve its history.

I built this museum in 2016 to prevent smuggling and inform young people about our past history.

Yar Mohammad, who was holding two small children in his arms, entered through the door of the museum. He said that there is no recreational place in Zabul where he can take his children, but he comes to the museum once a week or once a month with his family. In addition to having fun, he learns about the history of his country.

(Let’s come to the museum with our children. We want to learn about our history by using the artefacts in this museum.)

14-year-old Saadatullah then says that he saw many old and interesting things in the museum and is proud of his history.

((We saw swords, knives, vases and other old objects in this museum, we thank the museum director))

Jamil Ahmad Wafa travelled to Zabul from the mild weather of Nangarhar, but the cold weather here caused him resentment. 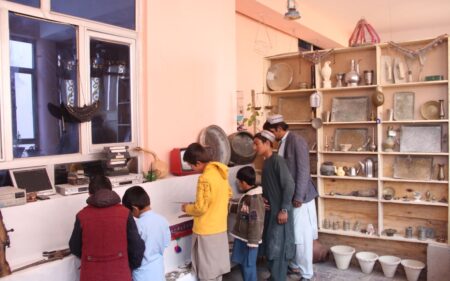 Stating that Zabul is a historical province and the existence of such a museum is necessary, he says: This museum should be enriched even more.

(We came to Zabul to see how Badam Gol Palace is a place. We saw the museum. It is a very good place. It has many historical monuments. We saw the old life with our own eyes.))

Abdul Sattar came from Kabul to visit Zabul and the museum and said to the key:
(We came to Zabul to visit this province. We were visiting the historical monuments of Zabul, it was very good to see this museum such museums should be activated in every province so that tourists can visit them.))

Mohammad Lal Amiri, journalist and writer of Zabul, says that the government should enrich this museum so that people can understand the culture and history of Zabul. 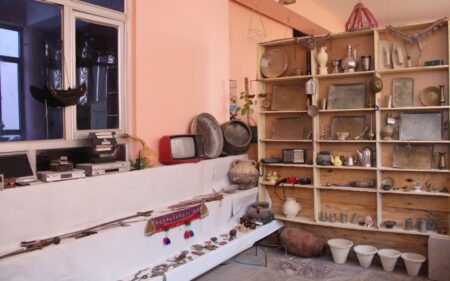 ((It is to remind the actions of past generations and update the people of this province and region. It is very important, but we request cooperation from the Islamic Emirate in strengthening this museum.))

Abdulwali Basharmal, the Minister of Culture and Tourism of the Information and Culture Department of Zabul, says that many people visit the Rahmati Museum and they are committed to cooperation in strengthening and enriching it.

It should be noted that Rahmati Museum was built seven years ago in a private house, but with its development, it was moved to Qalat Badam Gol Palace.