Female Beggars Have Increased in Kandahar

Recently, begging and collecting alms has become a tradition in the big cities of the country.

Although the Islamic Emirate has collected beggars and identified these people to solve this problem, the solution to this problem is to start large construction projects in the country and activate manufacturing factories.

The citizens of Kandahar are also suffering from these beggars, (They will not leave us until we give them money.)

Naqibullah, a resident of Kandahar city, says that when we buy groceries at the market, some people stop us in the name of charity, and forcefully ask for alms. He adds that the government or national businessmen should provide employment for such people. 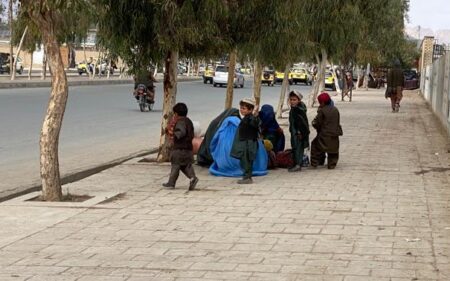 ((Female beggars and beggar children have increased in the city, and they ask for money from shopkeepers and others.))
According to him, another worrying thing in this field is that some people have immoral demands and use virgin girls for begging.
The number of female beggars in Kandahar is significant, most of them are women who have lost their husbands and are facing severe economic problems. Because of this problem, they are forced to beg.
Asma, a 36-year-old woman in Kandahar who has five children and no breadwinner, says she is facing many problems.

According to her, when her children are sick, she has no money and this has forced her to beg in the market.

((My children are dying of hunger. There are seven of us, we don’t have enough money. My husband leaves in the morning and returns empty-handed in the evening.))

47-year-old Fatema, who is a resident of Uruzgan province and is busy begging in the market, says that she committed suicide three times due to problems.

(My children go to bed hungry at night because they have nothing to eat. It is better that these orphan children who have nothing die. I pulled a knife on myself three times).

The Islamic Emirate has established a commission to help beggars in major cities of the country for beggars, women, children, and men.

In order to prevent begging this commission, beggars in Kandahar and other provinces are registered and each of them is given food and cash every month.

Mawlawi Komail, the head of the said commission in Kandahar, says that 20 thousand families were registered at first and after registration and survey, 2000 of these beggars were declared eligible.

According to Komail, the families of these beggars are helped every month.

((2000 needy families have been registered and now we give them 1000 Afghanis in cash and food per month))
According to Komail, each eligible family will receive 1,000 Afghanis. He says that out of these 2000 beggars, 600 are women.
Economic experts emphasize that a permanent solution should be considered to improve the lives of the needy.
Masoud Mohammadi, an expert on economic issues, says: First, these people should be trained and similar centers should be activated for counseling in order to give them proper guidance.
(They should be given small loans so that they can start their own businesses. This way the beggars can become self-sufficient).

Kandahar is one of the first-class provinces of the country, whose population is increasing day by day. People say that if work is not provided for young people and heads of families, the number of beggars will increase and it will lead to criminal crimes.

Residents of Remote Areas of Kandahar Need Female Doctors in Their Villages.