The Severe Cold has Killed Dozens of Drug Addicts

Officials of the Ministry of Public Health say that in order to prevent more drug addicts from dying in the coming cold weather, the process of collecting these people has started in the center and provinces and so far ten thousand addicts have been transferred to treatment centers.

According to reports, 35 drug addicts have died in Herat province and 18 others in Kabul due to the severe cold.

I have come to Pol Sokhta a bridge to the west of Kabul city, which is known as a place for drug addicts.

Hundreds of drug addicts who live under this bridge in the cold weather have faced the threat of death due to the severity of the cold weather in recent days, and some of them have also died. 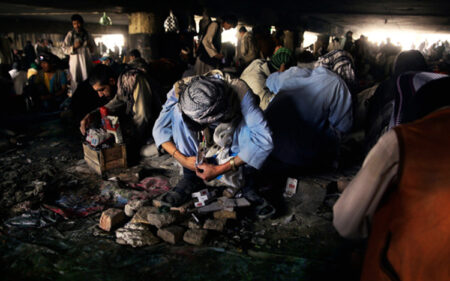 Officials have come to the area to save the lives of these drug addicts and to collect them to prevent more casualties.

Qari Fawad Abubakr, one of the officials of the Anti-Narcotics Ministry, announced that 18 drug addicts died due to extreme cold weather.

He said, ‘The collection of drug addicts has started from 15 places in Kabul and so far we have transferred 2000 drug addicts to the treatment center.’

This official of the anti-narcotics agency also announced the arrest of 20 drug dealers during this operation.
At the same time, Gholam Hassan, a resident of the sixth district of Kabul city, told me during the gathering of drug addicts: ‘A number of drug addicts have died due to the cold weather and were buried in this place (under the bridge) with their clothes on.’
On the other hand, Nasir Ahmad, another witness from the area praised the government’s action, but said: ‘This cannot be a solution, those who sell drugs here should be arrested.’ 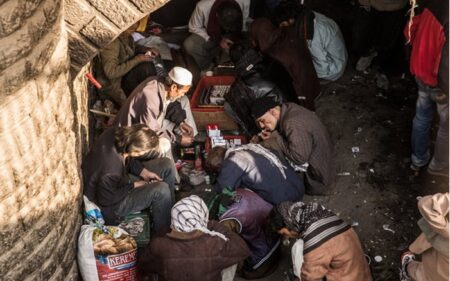 However, the officials of the Ministry of Public Health say that in order to prevent addicts from perishing in the cold weather, the process of collecting these people has started in the center and provinces.

Dr. Sharafat Zaman, the spokesperson of the Ministry of Public Health, says: ‘Ten thousand addicts have been collected from the center and provinces and this process is still going on. Our goal is to treat them and prevent them from dying.’

At the same time, a number of social issues experts say that no fundamental solution has been found for this problem.

Halim Shalamzai is of the opinion: ‘It is better that all relevant departments provide better and more effective treatment to prevent people from becoming addicted again so that there is no need for the addicted person to become addicted again.’

Prohibition of Work; Women Become more Helpless than Before